The news broke on the morning of July 25th with the publication of the latest study from Neuropathologist Ann McKee and Boston University. Out of the 111 former NFL Player’s Brain’s studied, 110 of them show signs of CTE. Chronic Traumatic Encephalopathy (CTE) is a Neurodegenerative disease linked to multiple traumatic brain injuries. The disease is currently only diagnosable after death via brain autopsy, and has been found in every level of contact sports as well as the military, in individuals as young as 18 years old. 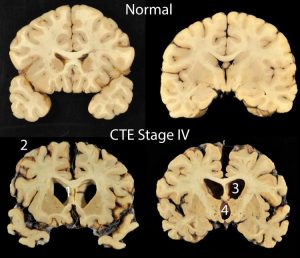 This is not new news though. In the 1920’s the disease was discovered in Boxers. Fast forward to the fall of 2014, and the first Boston University report hit the mainstream media showing CTE in 76 of 79 former NFL player’s brains studied. A major PBS documentary, A League of Denial and a major motion picture Concussion starring Will Smith followed in the next couple of years and helped grow awareness of the disease and the NFL’s situation. In 2016 a representative from the NFL testified in the Senate about a proven correlation between football and brain injury and the Boston University numbers continued to grow. Currently at 110 out of 111, we have an undeniable link between professional football and CTE.

It’s scary. Any way you look at it, if you played professionally in the NFL, regardless of the number of years played or hits taken, there’s currently a 99% chance you have developed or will develop CTE if you live long enough. As shown in countless stories, CTE is bad for the individual and even worse for the family of the former player. And so far, 99% of funding for CTE has gone into diagnosis and early identification, with very little emphasis on treatment. And this makes sense, how can you make an effective medication to treat the symptoms of a disease if you do not understand the mechanisms of action or full chemical composition and the onset of the disease process?

A small group of Doctors across the country lead by Carolina HealthSpan Institute decided to look at this crisis a different way. We asked a few distinct questions: What if we focused on the physiology (electrical activity) of the brain in alive former NFL players to see if there are patterns that could be responsible for symptoms associated with possible CTE? And what if we balanced and repaired the electrical system first to see if the brain could self-regulate and in-turn reduce the symptoms these former players were experiencing? In a self-funded study, first presented at an international Neuroscience conference in March 2017, the answers to those questions have finally led to some hope.

13 former NFL players with a minimum of four years in the league, a current diagnosis of Mild Neurocognitive Disorder and symptoms matching that of possible CTE experienced 24 sessions of Direct Neurofeedback over a three-month time frame. Direct Neurofeedback is an Ultra-Low Power, Pulsed Electric Current Neurofeedback technology, shown to be effective in reducing symptoms in Post-Concussion Syndrome, Anxiety, Depression, Cognitive Decline and more. It has no side-effects, is non-invasive and takes a matter of minutes per session to administer.

The study has yet to be published in a medical journal, however the statistics and clinical data show clear promise. All 13 players showed clinical improvements and positive changes in Brain Imaging (qEEG). Highly Statistically Significant positive changes were shown in overall Brain Performance (Attention, Memory, Flexibility, Speed, etc…), Overall Health Quality and Emotional Wellbeing as well as improvements in Sleep, Headaches, Anxiety, Frustration, Mood, Irritability, Depression and Concentration. The average reduction in total subjective symptoms across all 13 former players was 75%. All individuals tested one year post-treatment have maintained improvements or furthered improvement with no further intervention. The picture shows a pre-post treatment summary of a single case from the study showing dysfunctional brainwave patterns and matching low brain performance shifting to much more typical patterns and average – above average brain performance 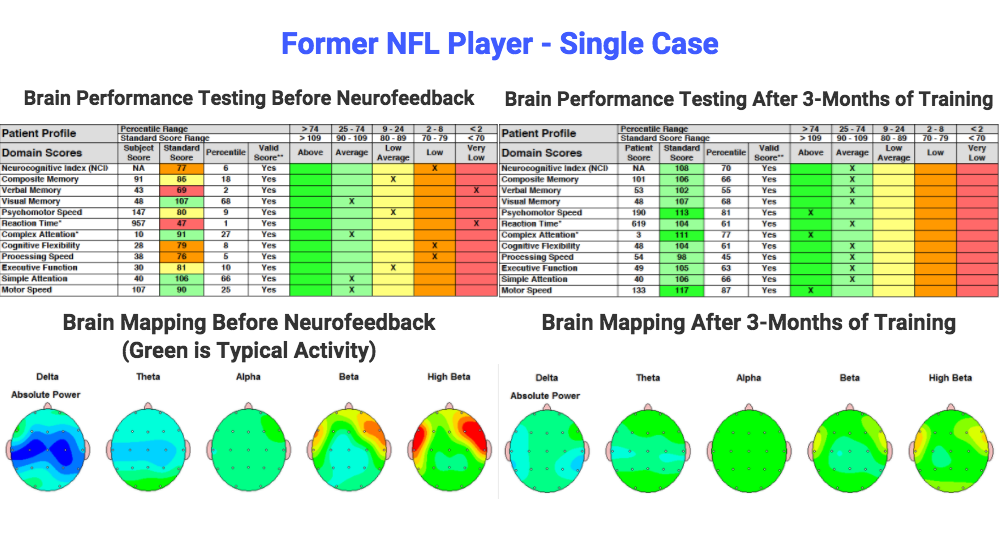 Why is this not bigger news? The scientific peer-review process takes a long time to validate, accept and publish results. In fact, these results may not see publication until late 2018 or 2019. In addition, this was not a large study and there was no control group to test against. But the results were astounding, and have been repeated since with individual case studies of former NFL players, collegiate football players and other post-concussion victims including military Veterans. We also do not know what the long-term implications of this single treatment period will be, and unfortunately there is no way to tell the impact it could have on the underlying disease process until autopsy.

But ask yourself, what’s the downside of being pro-active with your brain health? If you are concerned about CTE, seemingly your only other option is donating your brain to the Concussion Legacy Foundation and Boston University for your family to find out if you had CTE or not.

Sleeping better, gaining a stronger control of your emotions and mood, and increasing your quality of life is available today. And conveniently in most major cities. There will be an investment of time and money, but it will be nothing compared to the benefits you will achieve and quality of life you will regain, for you and your family.

If you’d like to know more, call Carolina HealthSpan Institute – 704.333.4817. We have references of former NFL players who have gone through the training and are willing to help you through the process and share their story and improvements. We’re happy to share the full findings of the study with you and your family and answer any questions you may have. If you are not located in the Charlotte area, we’ll find someone near you who can help. Don’t waste another day not feeling like yourself. We understand what you are going through and are here to help.

Update: 7/2018 – We recently launched the reconnect program. The ReConnect Program is based off the framework and fundamentals of The Bredesen Protocol® with variations based upon our clinical experience of improving the brain function of over 10,000 individuals. To learn more visit our cognitive decline page.